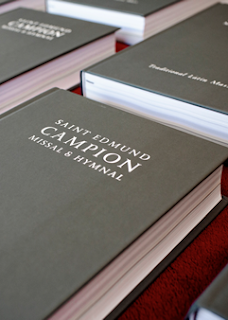 As part of my ongoing exploration of the Extraordinary Form of the Roman Rite (aka Traditional Latin Mass, Tridentine Mass), last week I took the plunge and ordered the second edition of the St. Edmund Campion Missal and Hymnal for the Traditional Latin Mass, published by Corpus Christi Watershed. My parish uses the Vatican II Hymnal, also published by Corpus Christi Watershed, as the missal and hymnal for its Ordinary Form Masses, and I am impressed by the attractiveness of its presentation and the selection of hymns. I've also been impressed by some of the recent liturgical musical compositions published and released by CC Watershed which are truly beautiful, reverent, and clearly inspired by and modeled after chant and polyphony, which I love.

The Campion Missal was very favorably reviewed by Father John Zuhlsdorf (Father Z.) and mentioned on Facebook by another priest friend of mine, Father Gaurav Shroff. Because the publishers just released the second edition, they are trying to promote it by offering individual and bulk copies at a considerable discount, and the net price is better than that for many comparable hand missals out there. On Monday of last week, I called the fulfillment house that's shipping the new missals, placed a phone order, and received my copy on Saturday, just in time for a "road test" at this Sunday's Mass. Overall, I was very pleased with the new missal. The Mass Propers are at the front of the book, with the Ordinaries for both High and Low Masses towards the middle. Prefaces for Feast Days are further toward the back, with a Kyriale, or collection of Gregorian Chant settings, and a generous selection of traditional hymns at the very back. As bonuses, the book also includes interior line art, color photos of the EF Mass being celebrated, and photos of pages from ancient and medieval manuscript missals.

Some users of the first edition complained that the cover and interior artwork of the first edition were excessively colorful, elaborate, and distracting, so the publishers have toned down these features just a bit for the second edition. The second edition now features a more sedate plain gray cover, and the ornamental capital letters for some of the interior text in the first edition, that were designed to be reminiscent of those in medieval illuminated manuscripts, have largely been simplified or eliminated. While the first edition had no bookmarks whatsoever, the second edition includes a single gray ribbon bookmark. Some users on Father Z's site complained that more ribbons would have been useful, but others pointed out that the bookmark problem can easily be corrected with holy cards or a multiple-ribbon bookmark available from any Catholic bookstore or seller  of religious goods.

The book is considerably larger than many hand missals, and this may be an advantage or a disadvantage, depending on one's point of view. It's an advantage insofar as the larger page size allows for a larger, easier to read typeface and less flipping back and forth between the various parts of the missal. The Ordinaries for High and Low Masses are printed in special color-coded sections on heavier quality stock than the rest of the book, making them easy to find and flip back to during the Mass.

The book's large size may be a disadvantage, however, if users find it heavier, bulkier, and less portable than other missals. It's really meant to be  a church book, purchased by the parish, used, and left in the pews rather than a hand missal purchased and used by individual parishioners. Nevertheless, for someone like me, who is still trying to become familiar with the Extraordinary Form, this is a very attractive and useful resource. It's a high quality book at a very reasonable price. 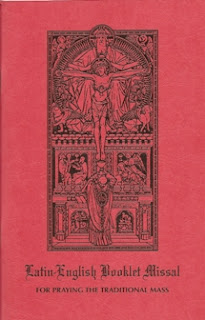 If purchasing a hardcover missal is a bigger investment than many individuals or parishes are willing to make, there are lower cost alternatives. My parish uses the Latin-English Booklet Missal for Praying the Traditional Mass (also known as Pray the Holy Mass) published by Coalition Ecclesia Dei and available from many Catholic booksellers. A Latin-Spanish version is also available. This little paperback booklet includes only the Ordinary of the Mass, but it's available for about $7 a copy and is far less expensive and far more portable and affordable than many comparable products. My parish's website also includes links to an online version of the liturgical calendar used before Vatican II and a list of PDF handouts with the Propers for each week's EF Mass. It's a simple matter to consult the calendar, find out which Propers will be used that week, print them, fold them, and insert them into the missal. Many Mass-goers find this a simpler and more convenient option than using a larger and more expensive hand missal. I may try this option myself next week.