in my imagination, anyway.

Back in March I waxed poetic about HeroMachine 2.5, the web browser-based software that makes it possible even for an artistically challenged dweeb such as myself to draw my own superheroes. Since then I've gone bananas with the silly thing and created whole battalions full of heroes, villains, and supporting players. I'm trying to create a fictional universe for some of them to live in.The HeroMachine software is now available for download, so users don't have to be online to create their own heroes. Since it relies on the Flash plug-in available for most web browsers, the software should work equally well on both Windows-based machines and Macs.

"But wait! There's more!" as the TV pitchmen say. Since finding HeroMachine, I've discovered two other online superhero generators: Create Your Own Superhero, part of the Marvel Comics website, and Fábrica de Heróis, which I'm guessing is Portuguese for "Hero Maker" or something similar. The entire application and the accompanying blog are in Portuguese since the creator, Eduardo Reis, is Brazilian, but a little experimentation should help users overcome the language barrier. I hope he'll consider releasing an English language version in the future. I gather that a previous version was called Hero-O-Matic, and that's how many people on the Web still refer to it.

All three superhero generators offer distinctly different drawing styles and unique features, which give the aspiring artist and storyteller many options to chose from. Here for example, is one of the first characters I created with Heromachine, the warrior maiden Celtica, an Irish-American super-heroine, and her hawk companion Branwen: 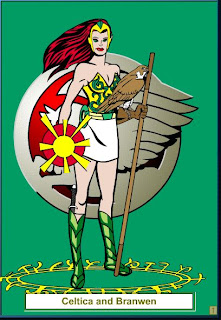 Compare that to, say, Lady Liberty, another super-heroine I designed using the Marvel Create Your Own Superhero site: 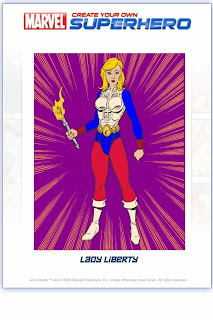 Now compare that to a character I created with Fábrica de Heróis (aka Hero-O-Matic), Cinco de Mayo, a Latina heroine: 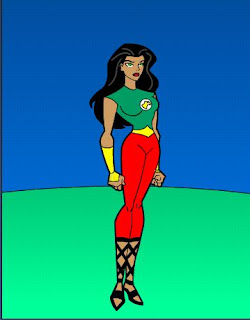 Lest you think that I spend all my time drawing pictures of buxom, scantily clad young women, I also draw pictures of guy heroes too. It's interesting to draw different versions of the same character using the different sites and compare the results. Here, for example, is a hero I first drew on the Marvel site, The Blue Eagle: 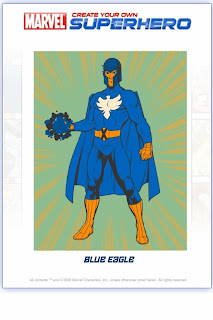 Compare that with his HeroMachine version: 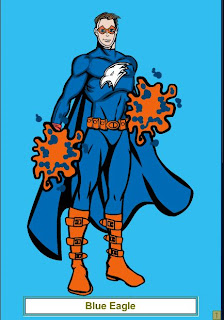 Notice that with the HeroMachine version, I ditched the helmet because I couldn't find a helmet I really liked. I haven't done comparison versions using Hero-o-Matic yet, because I've only just discovered it, but you can compare The Blue Eagle, versions 1 and 2, with another patriotic hero, The Defender: 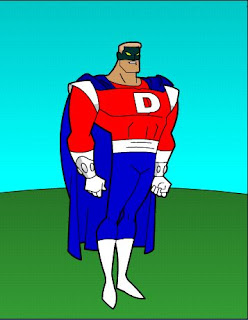 Overall, I still think HeroMachine is the best of the three generators, Hero-O-Matic runs a close second with many impressive features, and the Marvel Create Your Own Superhero site is a distant third. HeroMachine is significantly ahead of the other two in ease of use and range of features. The ability to download the software and have it run on your own computer is a huge bonus the other two can't match. HeroMachine is also unique because it allows users to save the parameters of their characters as lines of code and reload them into the application for later character editing. The Marvel site allows users to save their characters on Marvel's servers for later reloading and editing, but users must register with Marvel.com and can save only five characters at a time. Surprisingly, Hero-O-Matic has no way at all for character images to be saved and reloaded later for editing. When users of Hero-O-Matic want to edit a previously saved character, they must rebuild the character from scratch every time. That's annoying, to put it mildly. The final images in HeroMachine are the largest of the three, allowing the artist to easily see the individual item being worked on. Items in Hero-O-Matic are the smallest and most cartoon-like.

Items in both HeroMachine and Hero-O-Matic can be drawn with wide array of primary and secondary colors, but Hero-O-Matic's color menu can be tricky to navigate. The Marvel site offers only one color for each item, with lots of duplicate colors. HeroMachine also offers the widest assortment of possible backgrounds for characters, ranging from one and two color combinations to real settings, including cityscapes, deserts, jungle, a castle, and a futuristic science lab. Backgrounds in Hero-O-Matic and Marvel's site are limited to one color or combinations of two colors.

HeroMachine and the Marvel site allow the user to select thumbnails of items before they're added to the character, but Marvel has a paltry few choices compared to HeroMachine, and users of Hero-O-Matic have to click through all the options for an item in order by clicking arrow buttons. Both HeroMachine and Hero-O-Matic allow for layering of characters clothes and weapons, which creates some interesting effects, but Marvel's use of layering is very limited. Apparently, only Hero-O-Matic allows for variance in the texture and transparency of items, but I have yet to make full use of these features. Marvel does allow users to save their creations to their hard drives as JPEG files, but this feature runs slowly and is liable to balk, especially if there are other applications running in the background. Users can save their creations simply by taking screenshots in all three applications.

In short, the budding superhero creator who can't draw has some choices available, but in my opinion HeroMachine 2.5 is the best.

Totally agree with you. Excellent summary of the three generators. Heromachine is easily my favorite, but Heromatic could pull ahead if they'd just make the item menus easier to navigate...

Hey man!
I´m brazilian, and I read your comment at Hero-o-matic site.
I do a Blue Eagle in Heromatic, it´s amazing!
If you want the draw send me a e-mail to duduclark@yahoo.com.br

Hi,
I just discovered Hero-O-Matic and HeroMachine a few days ago, and I've had plenty of fun with it. Then, I found your post…
I thought it'd be fun to get a knack at your characters, since you seem to care about them a lot. I don't know much about them, and Celtica's exemple shows there's a lot of room for interpretation, even golden/modern age variations…

I was wondering if you got any response from the creator of Fábrica de Heróis (Hero-O-Matic) ?

One note about Hero Machine. Like the Hero-o-matic, you can adjust the transparency of any item. Just click on the green vertical bar to the right of the basic colors box