This is the latest in an occasional series of reviews of audiobooks I've been listening to. Enjoy!

I was attracted to this book for two reasons: first, because I had read Chabon's earlier Pulitzer Prize-winning novel The Amazing Adventures of Kavalier and Clay and thoroughly enjoyed it; and second, because this latest book promised to combine two genres, crime fiction and alternate history, in a way that sounded intriguing. However, on balance, I found the novel hampered by a relentlessly grim setting and mood, largely unappealing characters, and a plot that lurches from the unusual and experimental straight into the ridiculous.

The Yiddish Policemen's Union is many things at once — perhaps too many — a tribute to the classic hardboiled detective fiction of Dashiell Hammett, Raymond Chandler, and Ross McDonald; an exploration of Jewish identity; a satirical commentary on current events; and a foray into the alternate history genre, an attempt to create and sustain an imaginative world that could have been but never was.

The novel is based on a little-known piece of historical trivia: in early 1940, as the Nazis were sweeping across Europe, senior officials in the Roosevelt administration floated a proposal to make a portion of Alaska (then a U. S. territory but not a state) a haven for displaced and dispossessed Jewish refugees. In real life the proposal went nowhere, but Chabon's novel imagines how American and world history might have been different had the proposal been adopted. He also imagines what might have happened if the fledgling state of Israel had been overrun by Arab armies shortly after its birth in 1948, creating even more Jewish exiles in America's northernmost reaches.

Fast forward approximately 60 years to our own time. The city of Sitka, Alaska and environs have become a specially administered federal district and the home of a thriving Jewish subculture. Streets and public buildings are named for Jewish luminaries, and Yiddish, or a blend of German and Hebrew, is the language of ordinary conversation, even among non-Jewish residents. Inhabitants of the Sitka district speak "American" only when they want to say something particularly coarse or vulgar — which they do often. Whatever life the Jewish refugees and their descendants have made for themselves is in jeopardy, however, because as the novel opens, the Sitka district is only months away from "reversion" or being taken over by the State of Alaska. Will the Jews of Sitka be allowed to stay when the district reverts to Alaskan control, or will they become exiles once again? Many of the district's residents are anxiously pondering this question.

One man who is not pondering this problem is Detective Meyer Landsman of the Sitka Central Police, who has more immediate concerns. Both his personal life and career are on the skids. He drinks far too much; he's bitter and cynical about almost everything, especially religion; his wife, also a homicide detective, has left him; he has the highest number of unsolved, outstanding cases of any detective in the department; and he's living in a cheap flophouse hotel in a bad part of town. One night the hotel manager awakens Landsman from a drunken stupor to inform him that another guest, a heroin addict living under an assumed name, has been found dead, murdered execution style. Landsman and his partner and cousin, Detective Berko Shemmetts, begin their investigation but meet roadblocks at every turn.

An administrative fluke makes Landsman's estranged wife Bina his superior officer, and under a policy euphemistically called "effective resolution" she presses Landsman to either solve his outstanding cases or drop those which are considered low-priority and unsolvable — such as the case of Landsman's murdered hotel guest — before the district reverts to Alaskan control. Landsman refuses, on the simple grounds that he owes it to his neighbors to protect them from a murderer, showing his first flash of integrity and giving the reader the first and perhaps only reason to like him. Even after being officially removed from the case, Landsman persists with his own investigation, and the deeper he digs, the weirder and messier it gets.

In his youth, the dead man, the son of the local ultra-orthodox Rabbi, was renowned for his piety and intellect, a chess prodigy, a master of the intricacies of Jewish law, a boy blessed with extraordinary gifts of healing, and a man thought by some to be a mystical figure with the potential to be or become the long-awaited Messiah. That dream obviously went awry, however, and as Landsman strives to uncover the truth he follows a trail of long-buried family secrets, failed messianic hopes, and a bizarre plot by ultra-Orthodox Jews and Evangelical Christians (with the tacit support of "the president of America") to destroy the Dome of the Rock mosque in Jerusalem, rebuild Solomon's temple, and reinstate the Levitical system of animal sacrifices in order to hasten the coming of the Messiah.

I found the introduction of this last element, the plot to rebuild the Temple, the least effective part of the novel, a fairly obvious swipe at George W. Bush and the alliances between conservative Evangelical Christians and conservative Republicans. I am no unalloyed admirer of President Bush, conservative Republicans, or conservative evangelicals, but the characters Chabon creates to represent his social, political, and religious villains, strike me as clumsy, heavy-handed caricatures, not real people. The federal agent in charge of the Temple plot, whom narrator Peter Riegert endows with an exaggerated Southern drawl is a cynical, smarmy slime ball named Cashdollar. Far more effective is Riegert's portrayal of the Rebbe, the dead man's father, more mafioso than religious leader, a kingpin figure in the tradition of Sidney Greenstreet's Fat Man from The Maltese Falcon, Don Vito Corleone from The Godfather, or Jabba the Hutt from the Star Wars films — a figure all the more menacing for his massive size and his chilly veneer of politeness and decorum.

Other flaws I found in the novel were the almost unrelieved ugliness and bleakness of the world Chabon creates and the almost unrelieved ugliness and bleakness of the people who live in it. A certain amount of this is to be expected in hardboiled crime fiction, but a little bit of noir goes a long way, and Chabon really overdoes it. The author takes such pains, particularly early in the novel, to describe the bleakness and hopelessness of his imagined Sitka, and its grim, complicated history, that one wonders why anyone would choose to live there, even if it was a last chance refuge. Sixty years of living in this cold, barren outpost have made Sitka residents, Jews and non-Jews alike, bitter, cynical, and almost humorless, except for rare flashes of humor of the blackest kind.

Joe Kavalier and Sammy Clay, the heroes of The Amazing Adventures of Kavalier and Clay, have to endure hardships and heartaches too, but they have their youth, their fundamental optimism, their imaginations, and their art — even the "low art" of a comic book — to make that which is painful tolerable. Chabon denies the cast of The Yiddish Policemen's Union even these comforts. The characters are all long past the age of youthful idealism. Landsman long ago abandoned his religious faith and castigates both Judaism and Christianity as scams, delusions, and power games. His partner Berko is an observant Jew, but he also abandons his faith when he learns some ugly truths about his own past. Neither man has the storytelling or artistic ability of Joe Kavalier or Sammy Clay to create an alternate world in which to escape. Landsman does find a measure of redemption when he and Bina reconcile, but one wonders how long their love, supported by nothing else, will last. Chabon's Sitka is a cold, dark place in more ways than one — a place I don't care to visit again.
Posted by Niall Mor at 5:09 PM 2 comments:

The Blogs, They Are A-Changin'

The Catholic blogosphere is changing.

Mark Shea announces that his Catholic and Enjoying It blog will be more or less on hiatus until after Labor Day; Rod Bennet's wonderful Tremendous Trifles blog seems to have disappeared completely, with his blogspot being taken over by someone called peteinoz; Amy Welborn has completely changed the name, location, and focus of her blog (She explains why here); and Kathy Shaidle has been struggling with some difficult and painful personal issues and, I think, has a lot of difficulty identifying herself as a Catholic right now. She's announced plans for a change of name and focus for her blog, as well.

I can understand why folks might feel a need for change. "To every thing there is a season, and a time to every purpose under the heaven" says the Preacher (Ecclesiastes 3:1). We do things for a time or a season, but then circumstances change, and we realize it's time to do something different. Goodness knows, my own life is going through enough changes of its own as I struggle with unemployment and figuring out what comes next. To be honest, from time to time lately I've thought of shutting this blog down, too. I've been rather preoccupied with personal issues and things I'm not comfortable sharing with the blog, as you can understand, and I doubt I have much to say about the Catholic Church that hasn't been said better by someone somewhere else. For the time being, however, I will keep this blog going as a channel of communication with the outside world.

Mary, help of Christians, pray for us!
Posted by Niall Mor at 5:32 PM 2 comments:

Yeah, But I Can't Play The Banjo

Knew That English Degree Would Come in Handy for Something!

How's Your Vocabulary?
Posted by Niall Mor at 4:39 PM 1 comment:

Blessed Events in the Blogosphere

It's my happy privilege to report that the families of two bloggers I keep an eye on are welcoming new family members: 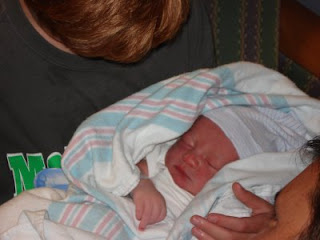 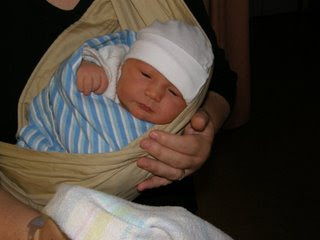 Both mamas and babies are doing just fine, thanks. Congratulations ladies! Thanks be to God for these precious and beautiful new lives.

THIS JUST IN: Dale Price, of Dyspeptic Mutterings, reports that he and his wife Heather are expecting the arrival of young master Louis George Price into the world some time in December. Deo gratias! Seems as if babies, just like June, is bustin' out all over.
Posted by Niall Mor at 4:53 PM 2 comments: