Fun with the Fab Four

Much as my sister's crock pot was a "delayed action" gift (one I'd had for awhile but didn't use until recently) I just found another gift that I'd forgotten about somewhat: A large collection of Beatles CDs that my brother made for me. I've enjoyed the Beatles' music for as long as I can remember, and a couple of years ago, when my brother mentioned that his own daughter had discovered the Lads from Liverpool, he also mentioned he had a rather large stash of Beatles' tunes.

I thought no more about it until sometime later when a largish package showed up in the mail bearing a rather complete sampling of the works of Messrs. John, Paul, George, and Ringo.

But by then, my musical tastes had moved in other directions and I was preoccupied with other things, so all those classic tunes got shoved to the back of the CD collection, where they were—as things shoved toward the back of anything unfortunately tend to be—largely forgotten. However, as I was looking for some background music for my sister's visit this weekend, I stumbled upon this treasure trove of blasts from the past. I also remembered the cool little feature on iTunes that will generate playlists automatically and create "jewel case" sized inserts with a track listing and clip art of your choice. Thanks to the good people at iTunes, those humdrum little discs now have custom artwork for their cases, and it's easier for me to tell what songs are on each one.

Here's what I had for lunch today. My sister and I made it Sunday afternoon in the crock pot she gave me several Christmases back. Tasty! 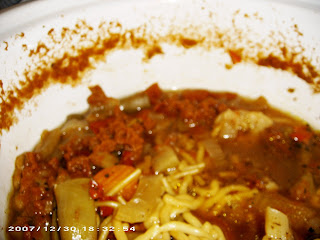 As I mentioned, my sister gave me the slow cooker several Christmases ago, but being fundamentally a bachelor, a lazy slug and a somewhat kitchen-phobic guy, I put off making anything and kept shoving it to the back of the closet. When Susan came to visit this weekend, we decided the time had come for a cooking class. We found a minestrone recipe from the Fix -It and Forget-It Cookbook (p. 68) that looked promising and set to work. My sister made stock from bouillon and chopped the onions, but I dumped in the other ingredients from cans, bags of frozen vegetables, and a box of spaghetti. I think we substituted garlic powder for garlic cloves and some pre-mixed Italian spices for the basil, oregano, and a bay leaf. How could I have missed this? Dump the ingredients in a pot and cook them for several hours until until they're done? Even I can do that! And it's a pleasure to have a meal that didn't come out of a cardboard box with Healthy Choice™ or Lean Cuisine™ on the side. Take that, evil corporate agribusiness military-industrial-food complex! Now where did I put that microwave cookbook?
Posted by Niall Mor at 4:50 PM No comments:

Pictures At An Exhibition

This is what happens when you give a guy a digital camera for Christmas.

He takes pictures of his brother's Christmas tree: 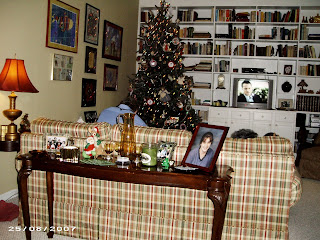 He takes pictures of a tree outside his apartment: 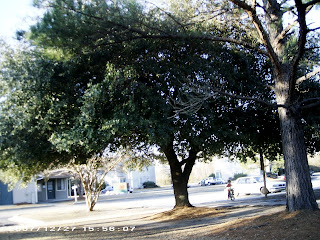 He takes pictures of his sister and her dog: 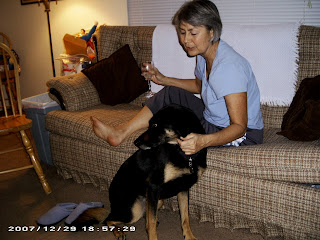 Expect more photo blogging in the future!
Posted by Niall Mor at 10:48 PM No comments:

The Price Is Right!

America must need lerts, because The Boy 2.0™ is quite alert. He's also a shameless charmer. Photos to follow.

Huzzah! Woo hoo! Deo gratias! Unto us a child is born! (No, not THAT one!) Congratulations, Dale and Heather!
Posted by Niall Mor at 12:04 AM 1 comment: