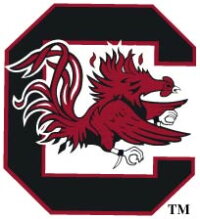 The defending national champion Crimson Tide had won 19 straight game, including last week's 31-6 rout against Florida, since losing the Sugar Bowl after the 2008 season to Utah. The Gamecocks (4-1, 2-1 Southeastern Conference) had never beaten a No. 1 team in four previous tries.

But the Head Ball Coach, in his sixth season at South Carolina, had the players to beat Alabama using the Tide's own formula.

Garcia and Gamecocks cashed in chances when they got close to the goal line and shut down the best tailback duo in the country, making themselves a factor in the SEC title chase.

South Carolina shredded the country's top-rated scoring defense, putting up the most points on Alabama (5-1, 2-1) since a 41-34 loss to LSU in 2007. The Gamecocks scored four touchdowns when they got inside the `Bama 20--double what the Crimson Tide had allowed coming in.

Alabama's Mark Ingram and Trent Richardson were held to 64 yards on the ground as the Crimson Tide tried to rally back, as it had in beating Arkansas 24-20 two games ago, through the air.

The Crimson Tide made a charge, getting an odd safety by Garcia, a field goal and a 51-yard touchdown catch by Darius Hanks that turned a South Carolina's 21-9 lead into a 28-21 ballgame.

Alabama's last chance to tighten things came at the start of the fourth quarter when Jeffery, the SEC's leading receiver, bobbled a catch into the hands of defensive back Will Lowery for an interception.

But Greg McElroy was sacked for a 7-yard loss by Stephon Gilmore and Alabama coach Nick Saban called a fake field goal that didn't come close to working as offensive lineman Ed Stinson dropped the throw from holder A.J. McCarron.

South Carolina answered back with a 75-yard drive, ended by Lattimore's 2-yard score with 7:01 left that put the game away.

Alabama could not respond and South Carolina fans, as they had after the basketball team beat Kentucky in January and the baseball team beat Arizona State at the College World Series in June, celebrated beating the country's No. 1 team.

Lattimore finished with 93 yards. He also caught Garcia's first scoring pass, a 9-yard touchdown in the opening quarter to take the lead for good.

Garcia was a tidy 17 of 20 for 201 yards and the one interception. He also picked up a critical fourth-and-1 on the Gamecocks final scoring drive. Jeffery had seven receptions for 127 yards, including TD catches of 26 and 15 yards.

McElroy threw for a career-high 315 yards, but was sacked seven times.
Posted by Niall Mor at 8:42 PM No comments:

Do That Funky Hand Jive!

I saw this on Mark Shea's blog today and could not stop watching it. Really amazing stuff

Suzanne Cleary and Peter Harding are world-class Irish stepdancers who became bored with the strict requirements of the form and decided to turn the genre on its ear by blending it with other styles of music and dance. Videos like this are the result. They perform under the name Up and Over It and bill themselves as "Irish Dance for the Post-Pop Generation." From the duo's website:

Acclaimed Irish Dancers Suzanne Cleary & Peter Harding blow the brains out of the Irish Dance show genre in a multi-media extravaganza. This brand new show liberates Irish Dance from its velvet-clad, tin-whistle-blowing, diddly-idleness and drags it kicking and screaming into the 21st Century. Inspired by hip-hop theatre, contemporary dance and electro-pop, Cleary and Harding present their alternative take on the Irish dance show format, asking what’s next for the 90s phenomenon we all loved or loathed?

I'm not sure I like their rather dismissive, "Oh, we're so beyond all that," attitude toward traditional Irish dance; for me, as an American who discovered Celtic culture as an adult, much of the traditional music and dance is still new and interesting. However, there's no denying their talent or the fun of this video.
Posted by Niall Mor at 6:06 PM No comments: